Hope Dealer: A Student’s Journey From Homelessness And Addiction To College And Advocacy 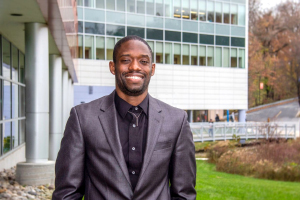 Frederick Shegog is a man who knows all too well about the struggles of this world. In his early twenties, he watched his future dreams fade away as substance abuse and mental illness took over his life. The next decade of his life would be a rough one, but not only would he come out better from it- he would change his life to helping others overcome as well.

Frederick Shegog, better known as Freddy, was always a happy and motivated kid until substance use disorder began to take over his life. Unaddressed mental illness, low self-esteem, and being bullied began to linger in his mind with each toxic substance he abused. It wasn’t long until his struggles with addiction and mental illness took over, and he found himself homeless. Alone and on the streets in Philadelphia, eating discarded food he had found in the dumpster, Freddy realized he had hit his rock bottom.

As a child, he had seen addiction affect his family, but it wasn’t until he found himself in the eye of his storm that he realized he needed help. Because he had seen his mother attain sobriety and even start a career in the field of recovery, he had a good idea of where to turn to for helping himself. He slowly began his journey, which would take him from the streets to a treatment center, then to a half-way house, and eventually on to become a college graduate with honors and his own successful business. Freddy knows that the road to success can be long and hard, but he also knows that success and joy are possible for not only him, but all of those still struggling as well.

Having lived life struggling with substance abuse and mental illness, and then also going through the journey to live a life of success, has given Freddy a valuable skill set that is unmatched by any college degree that can be offered. It has given Freddy an insight on how to communicate and interact with those who are still struggling on a personal level with which they can relate. Having those skills and then graduating with honors from Delaware County Community College with a degree in communications gives Freddy an edge when it comes to completing his goal in life: to make the world a better place, one youth at a time.

Freddy uses his talents and skillsets to become an ally for schools by working with them to encourage students down a successful path. He becomes an assistant to schools by also acting as a liaison for the parents/community to empower the students. He wants to motivate and encourage every student at the schools he steps foot in by reminding them they can have a successful future and overcome the hardships that the world tries to throw at them. Freddy says, “students in recovery are untapped resources that have gifts that can change the world.”

Collegiate recovery programs (CRPs) is another way that Freddy has set out to help students at the college level. Having been a college student in recovery, Freddy knows just how essential CRPs are when it comes to providing necessary resources that students in recovery need to maintain their sobriety. Sadly many colleges have limited funding and resources for CRPs, but Freddy is working to bring awareness to this need, and more of the necessary help to those college students who are struggling, by spreading the message that “health is wealth.”

In 2018 Frederick founded his own motivational-speaking company The Message LLC. He started this company because he wanted to make a difference in the world; he wanted to “sell hope for a living.” He has come so far from rock bottom where he once found his self-living, and he enjoys knowing that this is only the beginning. Even with the COVID-19 shutdown, Freddy continues to reach out and help where he can through virtual meetings and conferences to help motivate and comfort those struggling. In these past few years, Freddy had found himself with so many achievements and honors that he would have never even imagined when he was living on the streets. With all of this, Freddy remains humble and gracious, saying he “is thankful for the opportunity to help others who are still struggling find success also.”
‍
Here are just a few of Freddy’s speaking engagements:

Get Speaker Rates and Availability

Thank you! Your submission has been received!
Oops! Something went wrong while submitting the form.

“Freddie Shegog delivers a real-life-based message of hope, inspiration, and recovery.  His presentation pushes back powerfully against the hopelessness and despair that mark the disease of drug and alcohol addiction.   Every word from his mouth is filled with passion, compassion, and commitment to protecting his fellow brothers and sisters from contracting this deadly disease.  His life-changing message has been applauded everywhere he speaks.  Freddie is a man on a mission, a sacred faith-based mission; he has dedicated his life both to prevention and to bringing hope and recovery to those who are already suffering with the disease.”